At the end of January, Riley was in the school spelling bee. Two kids from each class, from third grade to sixth grade were in the competition.

While she was preparing for it, I was visited by the Ghost of Spelling Bees Past. When I was in fourth grade, I did not get into the school spelling bee. In my class spelling bee, I had to sit down when I misspelled the word April. I was stunned, because it was such an easy word. However, I forgot to begin by saying "capital A." Sad, but true.

I remembered Ally's short visit to the school spelling bee. She did not get past the word "benefit." She knew very well how to spell it, but switched two of the letters around in her nervousness. (Now, she speaks in public easily and naturally.)

Emilee had two tries at the school spelling bee. The two words she will never get wrong again are "enthusiastically" and "coordination." You never forget the ones you miss. You never get them wrong again. Emilee remembers debating whether coordination had one o or two. Her elementary school self pronounced it with only one o, so that is how she spelled it out.

After I had these memories, my brain strained for more information. I knew Ryan had been in a school spelling bee, and had gone pretty far in it, but had not won. I could not recall the details. I couldn't remember what happened with Kaitie at all. I really wanted to ask her, but I hardly wanted to admit that I just didn't remember.

I did ask Ryan to help me remember. Ryan came in second place to a younger girl. That is the part he did not enjoy at all. If she had not been able to make it to the city spelling bee, he was the alternate. She went. The word which is forever engraved upon his brain is "souvenir." When he told me all this, the memories came back. I thought that when I asked Kaitie, then the memories would come back as well.

That is not what happened. Kaitie told me that she purposely did not do well in class, because she "didn't want to be a geek in a spelling bee." I laughed. I had no idea.

Back to Riley. She was so cute. 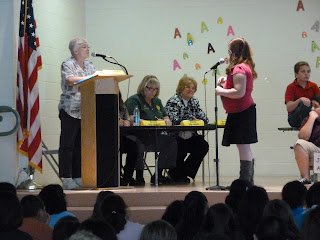 Here she is, missing the word "tiring." She didn't drop the e before adding the ing. She won't make that mistake again. She was the third kid out, but at least it was in the second round and not the first one.

Last night, she played the piano in the school talent show: 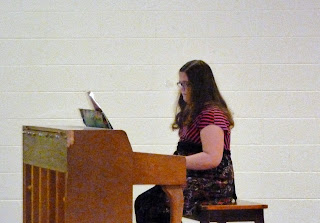 She played "Little Indian Lance." You are imagining it correctly. Anyone who has ever had to play the piano has to play this type of pounding song at some point.  She did a good job.

I only had a short visit from The Ghost of School Talent Shows Past.  When Emilee was in fourth grade she and her friends did a dance routine for the school talent show.   They danced to Ciara's 1, 2 Step.  An older sister of the girls got them ready.  Emilee had more hairspray than at any point in her life.  She said she felt like a poodle.  That is her main memory of it.  I wonder what Riley will say about her talent show in the future.....
Posted by Tina at 12:55 PM

Third grade. The word was believe. Love,
The geek in the spelling bee who lost...quickly