My last post was called "Remember the Rain." Since it rained again now, I decided to write again. Not really. I love to write, and I have missed this blog.  Since I started taking classes a year ago, I have not taken the time for this like I used to.  I can't believe I only have 22 posts for all of last year.
The big adjustment I have been making right now is having Kaitie and Ally move away in January.  Yes, Kaitie had been gone already.  She spent a semester at BYU-Idaho.  Kaitie decided that she and Idaho were not a perfect match, so she transferred to ASU.  It was better than great having her home for the holidays.  On January 2, Ally took her to Tempe and moved her into a house near the campus.  What a difference from having a big family trip to Idaho and a big goodbye scene!  I have to say it feels good knowing that she is only three hours away, instead of fifteen. 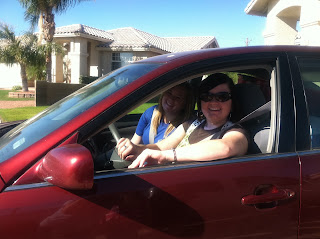 ﻿Here are Ally and Kaitie, the morning of January 2, about to leave the driveway.
Ally returned home a couple of days later, and on January 6 she moved to the Salt Lake City area.  Jeff drove up there with her and flew home after she was settled.  She found a part time job, and is still looking for THE job.  I can't imagine moving to cold country in January, but Ally seems to be up for that challenge.
It is good and bad watching my kids go out into the world.  I am proud of them.  I miss them.  I don't want them to be home.  I do want them to be home.  I want them to want to be home.  I want them to feel competent and independent enough not to want to be home.  Have I made myself clear?
Posted by Tina at 10:35 AM 3 comments