It has been extra hot, for what seems like ages.   I am going to share a couple of pictures from when it rained for ten minutes, two weeks ago. Yes, in the desert we have to record our memories of rain and then relive them from time to time. 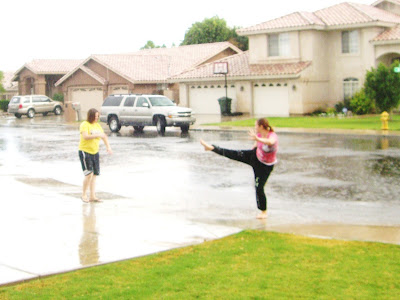 When it rained, only Emilee and Ally were home. They aren't little kids anymore, but they ran and played in the rain with childlike delight. I did what any mom would do when her babies are playing in the rain....I got a camera. 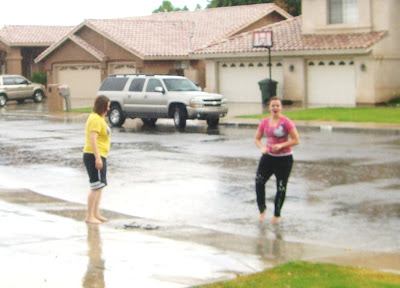 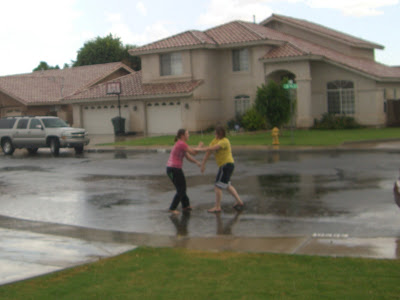 Oh, and I could let them fight without intervening. I used to think they would outgrow this need to fight, but I was wrong. Thankfully their goal is to annoy and entertain, rather than to harm. 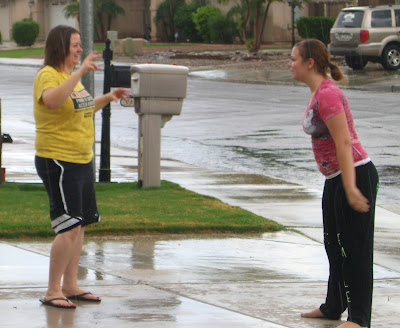 It stopped raining as suddenly as it started.  Here is Ally, trying to convince Em that they should dance in the driveway.  Can you see that Emilee is not so sure?  But as they started to dance a little, the rain started again.... 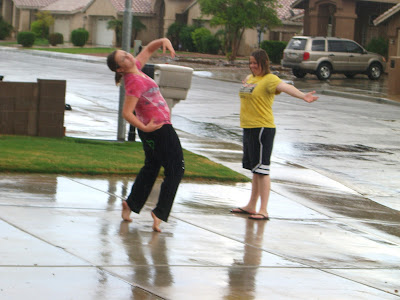 And then there was no stopping the dancers......

Now I have relived the rain, and I feel better.
Posted by Tina at 7:33 AM 2 comments

I guess I am very self absorbed today.  I added a Pinterest button on my sidebar, so I have been trying to get started on that.
I have also been trying to decide on a new facebook profile picture. This is important work ;)
I was going to put in the first picture here: 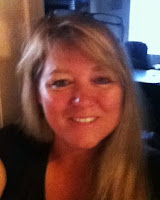 Emilee said no.  I thought it was fine.  She says it reminds her of someone from school, so I shouldn't put it in.  I don't even know the person from school, so I am not sure what it has to do with me.  She said I should put in this picture:
﻿

I am not as sure about it.  It is fine.  It does represent me right now, sitting at the computer and doing lots of homework, but I don't know...
The other one Emilee wants me to put is this: 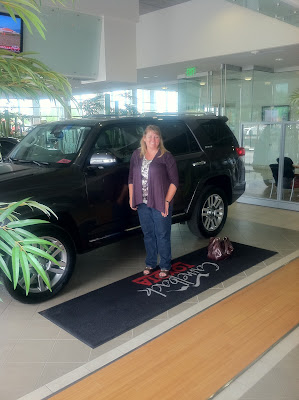 This is me, and my new car.  It is my first new car.  I never thought I would have an actual NEW car.  ﻿I told Emilee I didn't want to make a big deal of my car on facebook.  Oh, I will probably write a status about it, but not have it as a profile picture.  That would be bragging.....like I am right now:)
I think I will go for a drive now....
Posted by Tina at 5:28 PM 5 comments