All Six of Them

For the last few days, I have been writing again, and attempting to catch up. I guess I started with the most recent and am now moving backwards. We stopped for the day in Salt Lake City, on the way to take Kaitie to school. It was fun to spend some time with Ryan and Brittany. For awhile, all the kids played Monopoly Deal. Ryan and Brittany introduced this game to us last Christmas and it is a lot of fun. We also went miniature golfing later that evening. I regret that I didn't take any pictures of that! (Riley got a hole in one, and she was the only one to do it.)

So here is a picture of the six of them playing cards. It is actually a two second video. I got a new phone for my birthday, and was still getting used to it when I was taking the picture. I didn't realize it was on the video setting.

I have written about this place a few times in recent years. I almost decided not to include this post in my attempt to catch up. I decided to just write a quick thing, and include a few pictures. 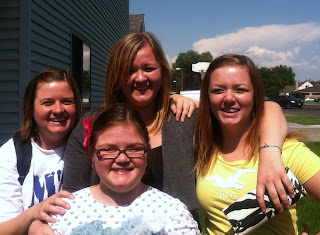 First, here are all my girls together right before we left Rexburg for Yellowstone.  It was a stunningly beautiful day.  I needed my sunglasses to block that bright sun.....and to keep my tears mostly to myself. 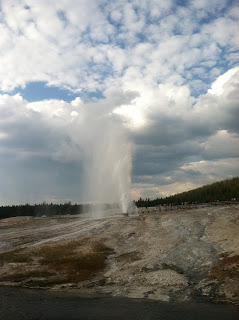 At Yellowstone, we knew we needed to go to Old Faithful first.  Ally had never been there.  While we were waiting for Old Faithful, they announced that another less faithful geyser was about to blow.  It is called the Beehive geyser.  It is close to Old Faithful and was quite a sight to see.  It was fun to watch with Ally, and she gave audio that went along lines like this, "Ten thousand years will give you such a crick in the neck!" 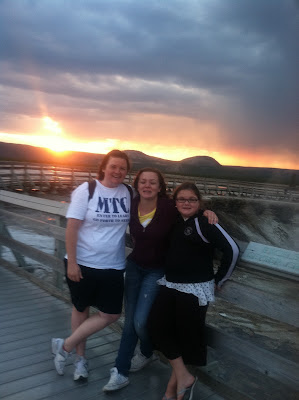 We went to the Midway Geyser Basin, one of my favorites, at sunset. 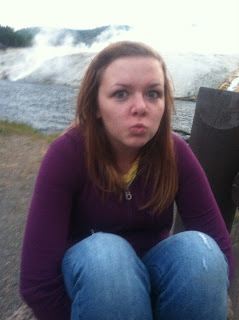 Emilee decided to get in a little "owling."  If you are "owling" around your mother though, you don't get to perch on the rail right over the river....just next to the river. 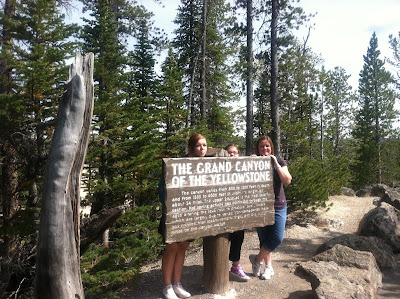 Ally wanted to see waterfalls, so we went to the Grand Canyon of the Yellowstone. 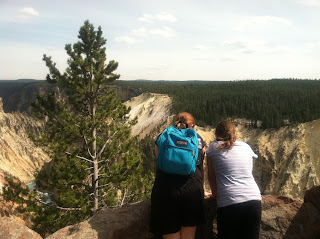 This makes me want to go back to the "if you know us" post.  If you know Riley well, then you know she is afraid of heights, and was nervous just looking over the edge.  It is funny how the kids are all so different.  Ally and Emilee would have hiked right down if given the opportunity, and Riley could hardly stand to even look. 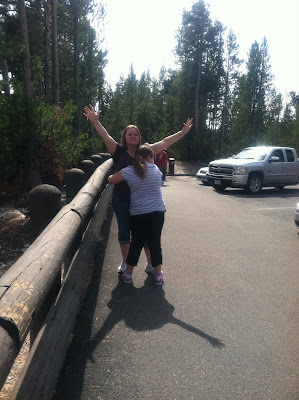 For a little while, we didn't know where Ally was.  I was not worried, but Riley sure was.  When she came back, to show us the new and awesome view she had found, Riley was so relieved to have her back. 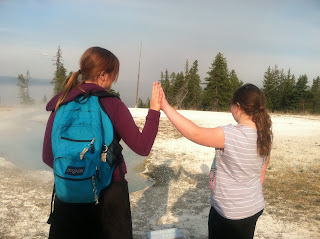 This isn't the most usual sight on our family trips.  I don't know what these two were in agreement on here, but I had to snap a picture so that I would have proof. 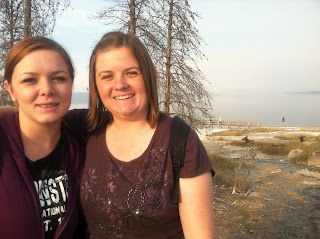 This picture is at what is called The West Thumb of Yellowstone Lake.  See the elk, just sitting a few feet behind Emilee and Ally? 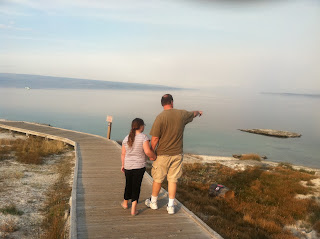 I love this picture!! 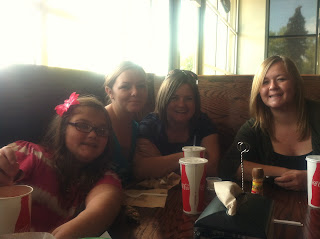 After Yellowstone, and on the way home, we stopped to see how Kaitie was settling in.  We took her to lunch, and then really left this time.  The miles home felt so long to me, as they represented a big distance between me and my awesome girl.  Thankfully, it is just a physical distance.
Posted by Tina at 9:00 AM 3 comments

Riley and Emilee both take dance classes. Between the two of them, I do something dance related six days a week. Last Saturday I took them to a day long hip hop festival. Riley was pretty reluctant. I told her it was just something to try, and have fun with. The instructors who came into town for the festival, dance for music celebrities like Beyonce.  That got her interest a little. 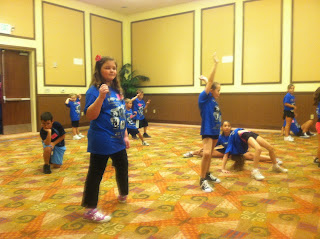 She was fine, but not very enthused through the day. I wondered if the whole dance thing was just not right for her..... 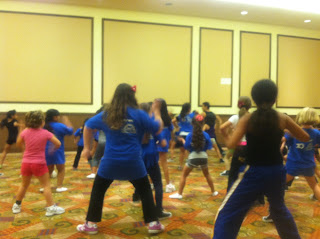 Riley perked up when they danced with the young man who plays the green power ranger on the tv show.  You can see him a little up in the front.  The kids really responded to him.  Okay, practically every female in the building responded to him.  There were people hanging in the doorways, and cameras flashing more than any other time in the day during this little dance.

I thought the day was fun, and Emilee really liked it.  Riley informed me she just does not like hip hop.  I understand.

Here is Emilee after the night performance....she had a really fun day and evening, but she was exhausted.

﻿So, this week I popped into Riley's tap class.  I wanted to see if she appeared unhappy in class, like she did in the festival.  I was glad to see that she was enjoying herself, and performing correctly.  I will just have to pay attention to her preference next time.  (I don't think she will go to the festival again, even if it means she will have to miss that power ranger guy.)
Posted by Tina at 11:50 AM 0 comments

If You Know Us Well

Here is a picture of Ally, Riley and Emilee at Yellowstone Lake. 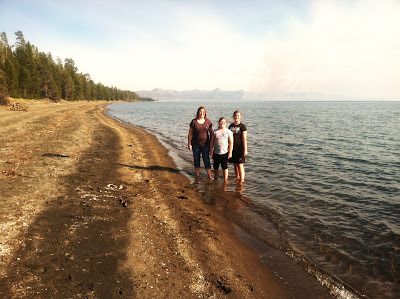 If you know Jeff well, it is no surprise to you that we took yet another trip to Yellowstone when we took Kaitie to school a couple of weeks ago.  He loves it there!

If you know me well, you know that I don't mind having the girls miss a week of school if it is for a good cause.

If you know Riley well, you know that she was kicking freezing water at her sisters, even though she was asked not to.

If you know Ally well, you know she is with us right now even though her mission wasn't scheduled to be over until next year.  A couple of posts ago, I referred to the fact that she was in a little car accident.  Her knee took quite a beating.  She went to some physical therapy while she was still serving as a missionary.  The care that she needed though was not consistent with the work required as a missionary, and she is home for awhile.  She has not made a decision about whether she is going back or not.  She still has lots of medical appointments, and it is not time to decide yet.

If you know Ally well, you know she was not all the way happy at Yellowstone.  She wanted to run around and play.  She wanted to hike.  She is limited right now, and that is hard on her.  She has always been very active and athletic.

If you know Emilee well, you know she was happy at Yellowstone.  She loves the outdoors, and was not unhappy about being absent from school.

If you know Kaitie well, you know why she is not in these pictures.  We asked her if we should visit Yellowstone before she was dropped off at school or after.  Kaitie chose not to go with us.  She loves us, but not Yellowstone so much.  She was eager to get her apartment set up, and get ready for her own new adventure.

If you know me well, you know that I felt a little like Kaitie about Yellowstone.  It is an amazing place, but we have been there a few times lately, and I am ready to explore something different. 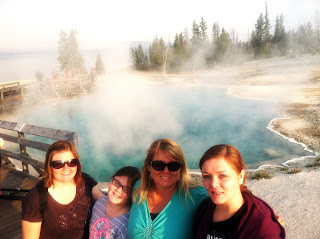 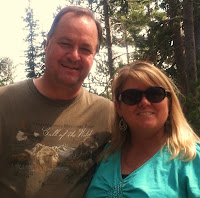 AND If you know Jeff well, you know that he did not touch a razor on the whole trip.

I wanted to bake bread on Monday. I used to do that a lot, but I haven't for a few months. I thought I had everything I needed, so I got started on it. I went to the cupboard for some white flour. I make wheat bread, but I use a little white. I had less than a cup of white flour. I didn't know. My cupboards and I have been out of touch lately. For awhile I had a personal chef and shopper. Who has that? Well, the rich and famous, but not people like me.

Two weeks ago, she started her freshman year of college. She is a thousand miles away from home. I miss that shopping and cooking. I also miss her singing around the house. I miss her laughter, when she would show me something outrageous on the internet. I miss her crazy moods, and her softer quieter ones too. Thankfully, in the 21st century we can keep in touch easily. I can still get in on those moods and laughter a bit.

I always tell my kids that I want them to leave home for school. It would not be good if they were still hugging my legs like they did once upon a time. That doesn't mean it is easy, or that I love it. The transition is hard for me!

I am proud of her, and know that she will do well out there. She is doing great with her transition, and I need to get busier on mine.

Here she is, in her new place.
I have so much more I want to write about. If it goes as planned, I will catch up writing about this year in the next few weeks. If not, then I will probably do a post sometime in 2012:)
Posted by Tina at 1:35 PM 3 comments