Blast From the Past

Jeff, Ally and I were supposed to go to San Diego on Saturday.  Riley changed our plans by throwing up each and every hour on Friday night.  You didn't want to know that?  Well, I will spare you the exact details.  Since we had time at home we weren't expecting to have, Jeff put up the Christmas lights.

Yesterday, Riley didn't go to church, but did start feeling better in the afternoon.  She got up and practiced the piano.  She picked out the one finger version of Jingle Bells.  She told me she must be out of her mind.  "This is supposed to be the month for turkeys," she exclaimed.  I personally like getting to Christmas things early, but she has always been funny about it.  Here is a little post I wrote about her four years ago, when she was four:
My older girls started singing Christmas songs in the late evening of October 31.  They are into it.  We love seeing the early decorations going up, well, I thought we all did.  For me, it is a reminder to stay on top of it.  It helps to get organized so I won't go crazy next month.  I like enjoying a long season.  I don't mind that the stores decorate to try to make more money. Our country is built on that.  Make it if you can...right?
We went into a Mervyn's on Saturday night, and Riley exclaimed, "What are they thinking?"  It was beautifully decorated, and you would think that a four year old would be delighted.   Maybe she is like one of our relatives who called a radio station to inform them that she will NEVER listen to them again, because they played a Christmas song the day before Halloween.  I, for one, cannot imagine caring about that.  When I hear people complaining about Christmas displays, I think of cranky, old scrooges.  But Riley?  It baffles me.
Well, another issue Riley has, is with Santa.  One afternoon, I was playing Christmas songs, on my new piano.  I was singing too.  I had Riley sitting by me, and I thought we were having some nice bonding time.  Suddenly, she put her hands over her ears.  She said, "I don't want to sing any more songs about Santa."  What?  She said, "I don't want him to see me when I am sleeping."  I had to stifle wild laughter.  Think of how these lyrics might creep you out, if you really thought about it...."You better watch out, you better not cry.  You better not pout, I'm telling you why.  Santa Claus is coming to town.  He sees you when you're sleeping.  He knows if you're awake.  He knows if you've been bad or good, so be good for goodness sake."  I am not allowed to sing, "Up on the housetop, reindeer pause....out jumps good ole Santa Claus...."
Riley does love songs about Jesus though.  She is going to be good at "Silent Night" and "Away in a Manger" by the time December 25 does roll around.  She is a good singer, and I guess she is not going to waste her talent on Santa.  This just might be good for our whole family.  We will focus better on what Christmas should really be about.  As a side note, Riley is going to sing a little solo this Sunday in church.  The kids are putting on a program, and Riley is going to be one of seven kids who each sings a verse in a song of Old Testament prophets.  She will sing the verse about Jonah.  She has practiced without showing fear, and seems to adore the microphone.  I am dying to know what she will do in front of a full congregation.  Emilee has a verse too, about Samuel.  She sings very well, but is not excited like Riley is.  Okay....back to my regular post.
Well, with my older kids there were usually a few times during the Christmas season that I would correct their behavior by reminding them about Santa.  I think with Riley, I might just have to threaten to sing about Santa, and her behavior will likely improve.
Just to give you an idea of Riley from back then, this was my Christmas card in 2006: 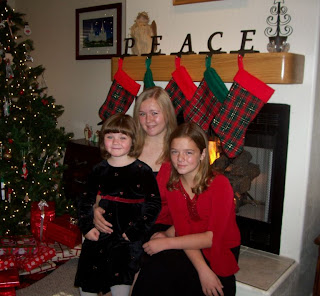 Voting was the last thing on my mind when I turned 18 years old.  At that time, I was glad that my vote was the only one being processed when it came to deciding what time to come in at night.

I still didn't vote when I was 21.  I should have been more grown up by then.  I could have voted for Ronald Reagan in 1984.  As it turned out though, he didn't need me for the victory.

I was nearly 30 years old when I actually registered to vote.  By this time, I had two little children.  I decided I would help them to be more civic minded than I had been.

Back then, Kids Voting was a new thing.  It was actually started very close to where we lived at the time.  Our kids could come with us to vote, and cast kid ballots of their own.  We all enjoyed this experience. (I remember that in 1992, six year old Ryan voted for Bill Clinton for the very important reason that he thought Al Gore looked a little like Jeff.)

Our family started a tradition back then of discussing the candidates and issues, voting together, and then going out for an Election Day Breakfast.  We did that for years.  Sometimes the kids were late for school because of this tradition.  We got some curious looks from school secretaries when we explained the situation, but no one was ever critical.

Now I know Kids Voting still exists, and that some communities go with it more than others.  I just haven't seen it for a really long time.  Even when it wasn't present anymore, we continued our election day traditions.  We could still discuss issues, and celebrate our vote together.  The last couple of years, it started to really lack something.  I can't identify the exact issue.  I just know that our tradition ran its course.  I love what we did, and now I love that we stopped doing it.

Why do I love that we stopped doing it?  Because this year, I think we found a new tradition.  I requested early ballots.  It was awesome sitting with Jeff and going over the ballots in detail.  We talked each other into some things, and out of other things.  I appreciated his explanations about certain wording in the issues.  I expect to do it this way for a really long time.  We didn't involve the kids this time, but we'll figure them in somehow in the future.  Maybe I will put Riley in charge of making me a sticker or something....I did miss getting a sticker;)

I meant to write this yesterday, so I could express my appreciate to all veterans who made my vote possible.  Well, I am late for that, but still very thankful today.....

It was easier than ever getting ready for Halloween this year.  Riley was a witch in her dance recital in the summer, and was thrilled to wear the same costume.  She wore this to school on Friday of Halloween Weekend, and to the church trunk or treat on Saturday. 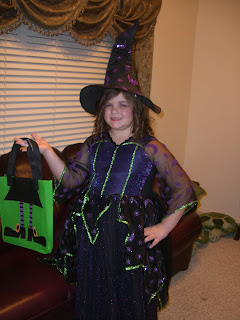 Here is a picture of Riley and her cousins at the trunk or treat.  I was having trouble with my flash, and it took a little while to get a picture so the Witch and the Aloof Rock Star don't look quite as good as in their original poses.  I believe the Zombie makes up for it though!  Isn't she great? 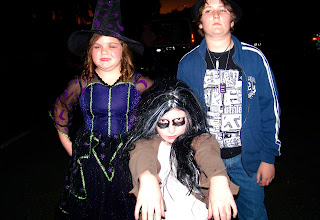 While the rest of us were at the trunk or treat, Kaitie...a pirate....was at a party with friends. 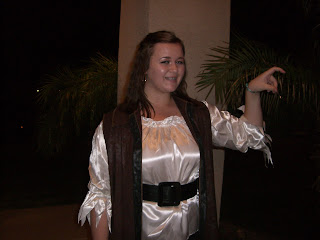 On Sunday, Ally passed out a little candy to the trick or treaters.  The highlight though, was our traditional Halloween in the Hallway.  I wrote about it in my last post....
Here are some of the characters I saw in my hallway last Sunday: 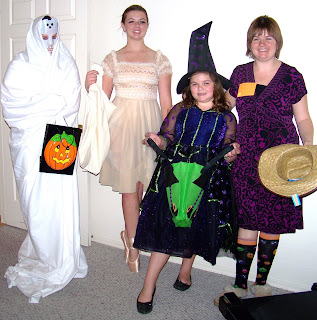 Each time there was something especially amusing.  In this round, that scary white thing on the left was silent.  No matter what anyone said, the response was only given with the eyes....frightening eyes.  It was hilarious. 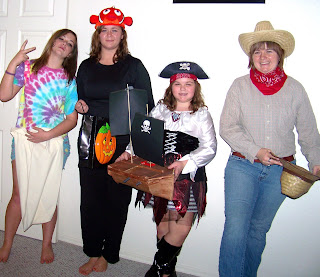 We have so many costumes these days.  Riley is wearing the pirate costume she wore at the end of the school year in second grade.  She used the ship she made as the candy container in this round. 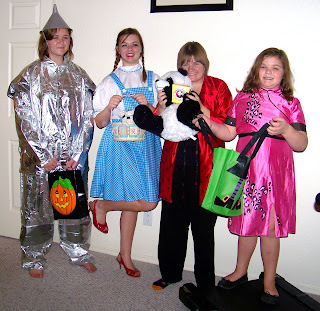 For years I have been trying to get Emilee to dress as Dorothy.  She won't do it in public, but she said I should be happy now that she has at least modeled the outfit for me. 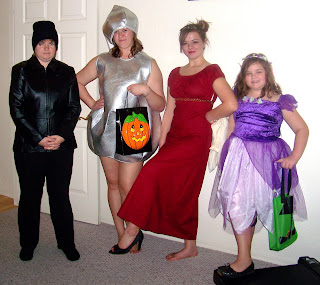 What is Ally in this picture, you ask?  Well, she said she is her 15 year old self!  (It was a short dressing-in-black stage she had.)  Emilee said she was a different kind of Cinderella.  Kaitie is a Hershey's Kiss, and Riley is a fairy princess. 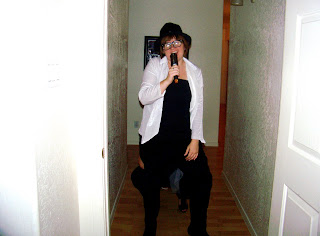 When I opened the door this time, I was greeted with Ally singing:
You shake my nerves and you rattle my brain
Too much love drives a man insane
You broke my will, oh what a thrill
Goodness gracious great balls of fire! And then the "show girls" popped out from behind her.... 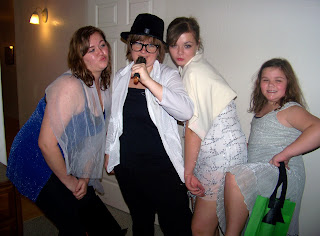 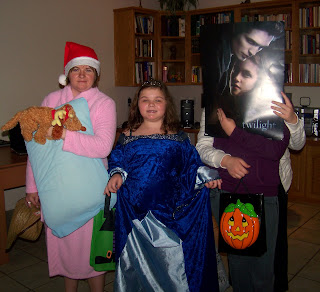 Ally was trying to get her Grinch costume together here, but she could only find the hat and the dog.  She ended up putting on a robe and saying she was Mrs. Claus....and she wasn't feeling well.  Riley was a beautiful princess.  Edward and Bella showed up too.  They didn't say much, but really...do they ever?
I thought the game would continue, but after this the girls pretty much attacked the candy bag and called it good.
Posted by Tina at 5:37 AM 5 comments