A truck loaded with pears from Oregon arrived locally awhile back. Since then, I have heard much talk of preserving pears. I have seen beautiful displays of shining jars lined up, and ready to take their places in the Museum of Preserved Pears. I wanted to join in somehow.

Well, the half a box we ate fresh is just a distant memory now. They were really good.

I preserved the remaining half box, and now it looks like this: 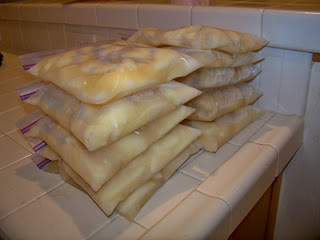 So, I didn't pay enough dues to be a Gold Club Member, or whatever that highest membership is called, but I hope this gets me "in" on some level.....;)
Posted by Tina at 8:27 AM

Are you making fun of pictures of jars of pears beautifully lined up?! :) I like your idea too! I think that will get some points on that "gold member card" - lots of points because you didn't neglect your children and family by spending hours upon hours during conference to get it done! :)

Are you kidding??? You are the smart one! Next time I buy a box of random fruit, I am coming to your house to "bag" it instead of spending hours canning it! Then we can sit around after and eat bon bons and enjoy all the time we saved!

Can I join you Linsey and Tina because more pears are on their way and I think I'll be brave and try again but Tina's way.

Why didn't I think of that?!

My peaches look just about like that. How awesome.