Riley turned eight in August.  I haven't even written about that.  There is so much I haven't written about.  Anyway, for us, eight is the age to be baptized.  Jeff and I wondered when we should schedule her baptism.  We knew we would really like to have all of our children there.  Ally only lives three hours away, but Ryan and Brittany live in Idaho, so we knew it would take some planning.

Ally had been waiting for her mission call, and at first we thought we might have the baptism in connection with a missionary farewell for her.  But we knew that might make Riley have a long wait for her baptism.  We finally decided to have the baptism on Jeff's birthday.  You see, it wasn't just any birthday, but a milestone birthday.  We thought it would be fun to bring everyone together for that birthday.

I started hoping that Ally's mission call would come on September 3, so she would bring it with her and open it at home.  I had really thought it would come before that, and she would just open it and call us and tell us about it.  Each day it didn't come, I thought maybe we would get to be together when she opened it.  Well, September 3 came, but not the call.  She came home for the birthday a little disappointed not to have the call yet.

Because Ryan just started a new job, he had very little time he could actually be home.  We flew Ryan and Brittany in, late on Friday night...September 3.  (The first thing Ryan did when he got home, was eat a peanut butter and jelly sandwich.  I loved it.  I used to have to limit him to one of those a day, or he would have eaten it for all of his meals.)

Saturday morning, we had a breakfast party for Jeff.  We had pancakes, and black balloons.  He opened his gifts, including a snake from Ryan.  Okay, a toy snake.  It is a running joke that has been going for years.  At many gift giving times, Jeff and the kids used to tell each other that they were getting snakes as gifts.  (None of us around here love snakes, so this was never a good thing.)  Quite a variety of pretend snakes have been given. 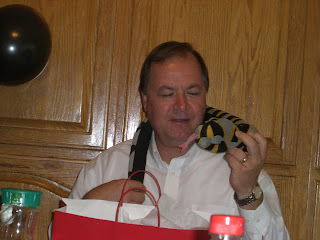 Jeff loved his little party.  He thought he was done with his portion of the celebration for the day.  He had a little yet to come....

Since we were all here, we had our family pictures taken that morning.  (Thank you, Jennifer Butler....my favorite photographer!)  We just did them at home, since it was hot out, and the day was busy. So, here is Ryan and Brittany.  They have been married a year now.  My mom walked in while they were being photographed and said that marriage really seems to agree with them.  Yes, they look great! 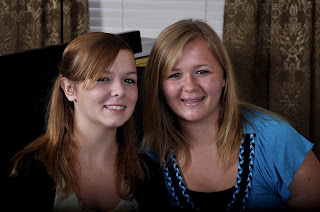 I love this shot of Kaitie and Emilee. 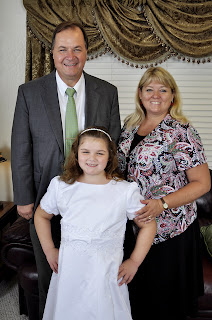 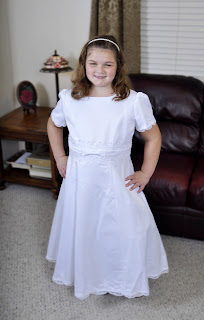 Riley felt so beautiful in her baptism dress! 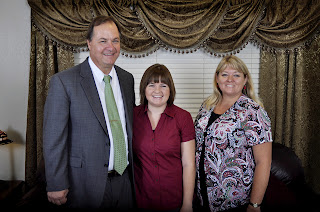 Right before we started this photography session, Ally got a call from her roommate.  A big white envelope had come in the morning mail.  The mission call!  Ally said that this roommate was babysitting, but when she was finished, she would fax Ally the contents of the envelope.   We were all so excited! 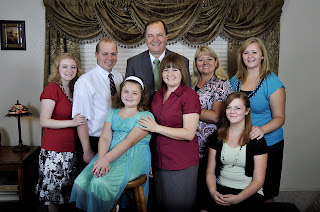 And here is the whole group.  We were having the least cranky photo session of our lives.  Amazing, but true...

After pictures, Jeff left for the church to go fill the baptismal font.  While he was gone, we set up a few extra things for our after-the-baptism gathering, that he didn't know about. 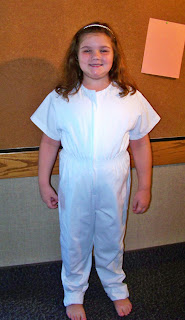 So, here is my girl at the church.  She was getting a little nervous... 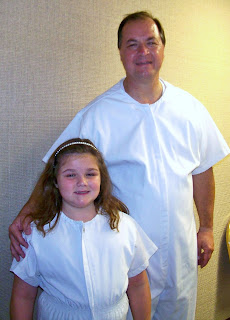 This is one of my favorite pictures...the classic Dad and daughter baptism picture.


I thought I would cry and cry during this baptism.  Riley is my baby.  I thought I would feel emotional about that.  Jeff conducted the meeting.  My parents gave the prayers.  Ryan and Ally gave the talks.  Kaitie and Emilee sang, "Beautiful Savior." (Oh, I played the piano, if you were wondering.)  I thought that watching my family take part in Riley's special day would be more than I could handle.  The only time that tears really came to my eyes was right when she came up out of the water, and walked back up the stairs to me, so I could help her get dry and change.  She was filled with joy and exclaimed, "I'm baptized!"  She was so pleased, and her happiness was so sweet.  Then she added, "What was I worried about?"  I love my little girl.

We invited our family and friends who were at the church to come back with us to the house for cake and snacks.  I regret that I don't have a picture of that group.  Some of our family traveled to be with us.  I really appreciate that.

Jeff was the last one to come home, since he had to see to things at the church.  When he walked in, we had a house full of people singing Happy Birthday.  It was awesome.  Then, we led him past Riley's cake...... 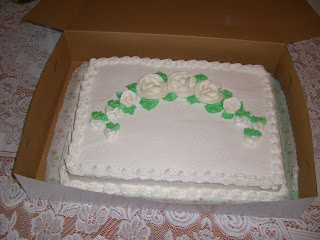 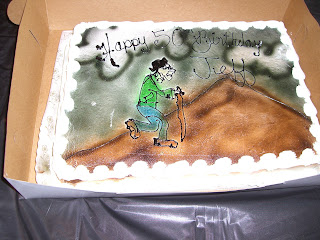 Kaitie helped me pick this out.  Don't you love it? (We wanted age, but not death...)

We had Riley's cake set out in the middle of the room, with a white cloth and white flowers.  We had Jeff's off to the side, in a much darker setting.  He was very surprised.  It was just the right amount of celebrating for him.  We had fun, but most of the day was about Riley.....well, until it was about Ally... 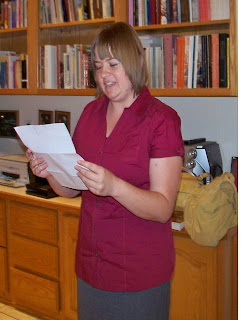 We had all waited so long for this call.  Ally's roommate hadn't been able to get away to send the call.  We asked her if she could scan and email it.  We should have asked that from the beginning!  When it came, Ryan printed it out...without looking...and even put it in an envelope so she could open it in front of everyone.  As you may have read in my last post, she was called to Arcadia California, and will go into the Missionary Training Center on December 1st.

As Ally read that call in front of a group of family and friends, there were loud cheers and so much excitement.  If she had received the call on any other day, she would not have had such a group with her.  As hard as the wait was, this was such a wonderful day for her to receive that call.  I'm so proud of her.  Well, I am proud of all my kids..... 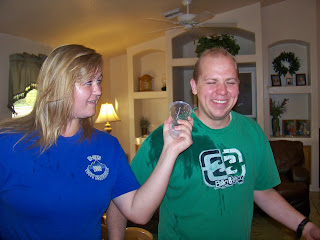 ....even when they act like this.  (This picture is a cheesy reenactment of a real water throwing scene.)

Ryan and Brittany left as quickly as they came.  They were back on a plane, first thing Sunday morning.  They were exhausted.  I think we all were.  We packed so much into just one day.
Posted by Tina at 2:00 PM 6 comments

Ally doesn't like finding out important things online.  Her friends know that if they have big news, they better get it to her personally.  So, she feels the same way about announcing things.  I was banned from any blog or Facebook announcing for the past few days, so she could speak to some friends about her mission call.  And Ally has so many friends!  Ally has more friends at her age now, than I have had during my whole life added together, and I am twice as old as she is.  (Oh, you want to be technical about that age thing?  I don't....)  So, it has taken Ally awhile to talk to everyone she wanted to talk to.  She hasn't actually talked to every person she wants to talk to, but she is working on it....

Saturday was a huge day here.  I am only giving the short version at the moment.  We had Riley's baptism, and Jeff's 50th birthday.  That was a lovely combination.  We were able to gather some of our family and friends for this big day.  Ryan and Brittany even joined us!  While Ally was here for all that, her mission call arrived in Tempe, where she lives.  Ally didn't want her roommate to just open it and read it to her, she wanted to open it for herself.  Her roommate was going to fax it, but couldn't do it right then.  Finally, her kind roommate scanned it, and emailed it to us.  (Wow...I just made a long story very short.)  Ryan printed it (without looking) and put it in an envelope for Ally to open in front of the group.

Ally was called to serve in Arcadia California, and report to the Missionary Training Center on December 1.  My grandma went to Arcadia on one of her missions, and I need to learn more about the time she spent there.  Ally is happy that she will be speaking English, and that she will not be buying snow shoes.  That is fairly close to home, but as one of her friends put it, "You can't ask for anything better than Southern California."

So, I have pictures and details and so many other things to write about.  And I will do just that very soon.

I have one more item of business to take care of.  There is the matter of the guessing, and the prize!

Ryan and Brittany Snow!  They made a list of five places in their comment, and California was their fourth choice.

Ally and I had decided already to make the prize related somehow to the area she was called to.  The following prize has been sent to the winners: 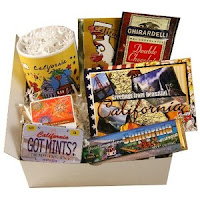