Hey, There is a Christmas Tree in This Post....So it's Okay

By December 9, does anyone even care what we did for Thanksgiving?  Well, we did set up our Christmas tree, so I guess I can still write about it now.

We had Thanksgiving dinner at our house this year.  We had a group of 20 people.  That is a low number compared to what we might have had. 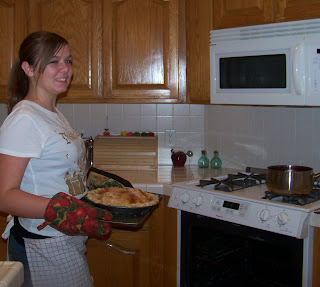 Here is Emilee, getting ready to bake her beautiful apple pie.  She made it all herself.  Okay, I cut the apples for her, but I didn't touch the crust.  It is good I didn't touch it or it wouldn't have turned out as well.  I haven't ever made a beautiful crust.  I make crumb top apple pies now, just to avoid that ugly crust business. 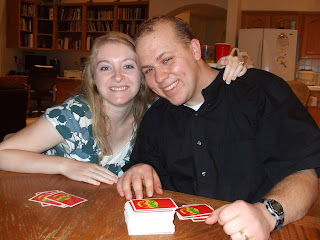 Ryan and Brittany spent the week here.  We loved that!

They brought swim suits and came totally prepared to enjoy a weather contrast.  The first night though, Brittany got an ice pack for her foot saying it had been sore, where she had a callus. This had been going on for a couple of days and was getting swollen.  The next day, it appeared to be getting infected so Ryan took her to urgent care.

The doctor opened and drained it, then found metal shards in her foot and scar tissue.  She didn't know how long that might have been there!  Poor Brittany ended up sitting around with her foot bandaged and elevated.  I don't think she had the week she envisioned at all.  We did play some games, and tried not to let her get TOO bored.  It was so nice getting better acquainted with her.  I can see why Ryan is happy :)

Ally was here less than 24 hours.  She came in after work on Wednesday and had to leave Thursday to be back to work at 6:00 am Friday.  You would think with a schedule like that, she might have slept in a little on Thursday.  She did not.  Jeff and I were up really early getting things ready for our 1:00 Thanksgiving meal, and who should come into the kitchen to help?  Ally!

After a couple of hours, I had four of my children around my table.  If you know us, you know who was not there...... 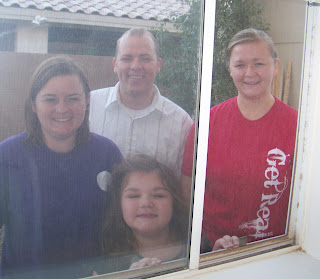 Here are the four who were awake, singing some crazy song from "She's the Man," outside of Emilee's window. 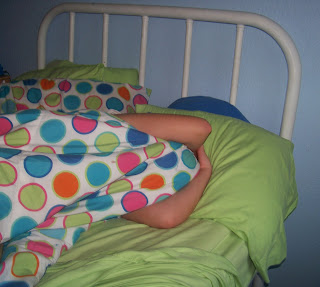 And here is Emilee's reaction..... 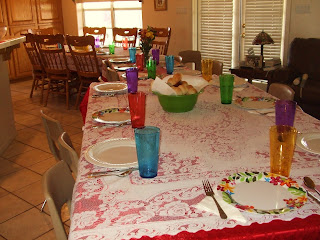 This picture was taken when we were almost completely set up.  I was happy to get 20 people seated, and not have to do a buffet like I have sometimes done before.  I have pictures of people sitting around the table eating too, but no one wants to look at those....trust me on this. 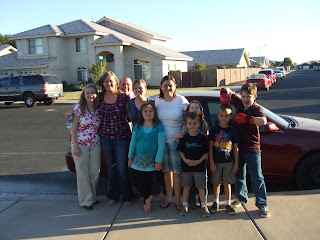 Like I said, Ally got on the road only a few hours after we ate.  We have a tradition that when out-of-towners leave our house, the kids chase the car down the street.  Here is Ally, and the group that was about to chase her car. 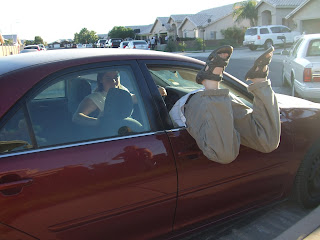 I think we all felt a little like Ryan here.....we were not quite ready for her to go. 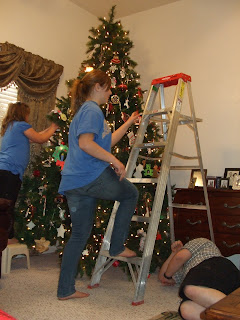 Life went on though, and the next day we got busy on our Christmas decorating. 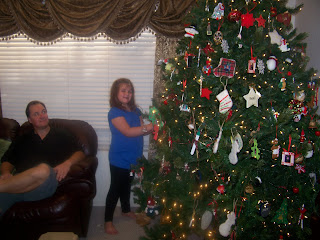 The kids still each look for the certain ornaments that they made, have their names or pictures on them, or which have special meaning to them.  They want to hang up THEIR ornaments.  My tree shows quite a lot of family history! 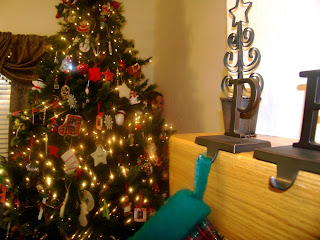 Ever the NUT, Emilee managed to get behind the tree and stayed there for awhile.  I would love to publish the text messages we sent to each other while she was back there, but I am not allowed to cross that particular line..... 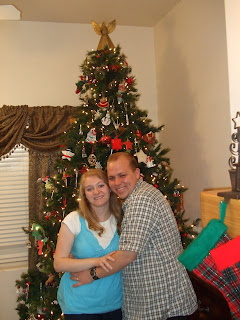 This was the last day of Ryan and Brittany's visit with us. 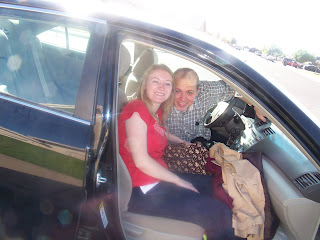 By the time they left for home on Saturday, only Emilee and Riley were left to chase the car!  (I didn't get a good picture of that, but they definitely did it.)

ps:  Most of these pictures came from Brittany's camera.  My thanks to her for letting me snatch them off  her memory card before she left!
Posted by Tina at 10:35 AM

How lucky you were to have everyone home! Emilee told my Kaitie about the singing- funny!!
And can I just tell you how impressed I am that she can bake a lovely pie!

FUN! I love that you had all your kids HOME and your tree is BEAUTIFUL!

I just LOVE to stop by and visit! I can relate to the Christmas ornaments--my favorite Family History!

thanks. i am happy to see the part that happened when we weren't there.

Awww, how warm and wonderful! I always feel like I'm visiting an out of town family member when I visit your blog. Can we come for Christmas? ;-)
(((Hugs)))

I'm loving your tree! I'm so glad you guys had such a great Thanksgiving-(minus poor Brittneys foot- ouch!)
I love your tradition of sending your loved ones off. and that picture of Ryan jumping in the car- awesome!
Woohoo to Emilee on her mad pie making and baking skillz! And I gotta say- her blue walls, green sheets and polka dot bedspread are way cute!