Was That Really Three Weeks Ago?? 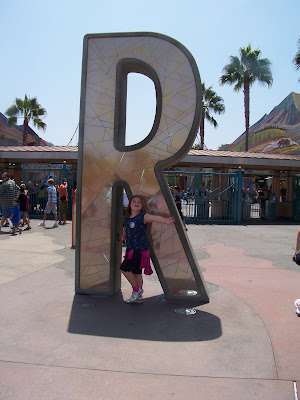 I wrote the other day about Riley's birthday breakfast with Lilo and Stitch.  It was a wonderful time for her, but it was only the beginning of her trip.  I know I have written a lot of Disney stuff this year, but that is just the way our year is going.  I told the girls I was trying not to take the same old pictures, but that I HAD to get my camera out for things that were new to me.
Obviously, Riley chose the "R" here, because of her name.  She was in an especially good mood, because we had just acquired her birthday gift card.  At Disney this year, you get free admission on your birthday.  If you already have a pass to get in, they give you a gift card for the amount that your admission would have been.  Riley was the holder of a $62 gift card.  We don't just give the kids that kind of spending money, so that was a huge deal to her!

It was a huge deal to me, to finally be on a family vacation.  The girls and I popped in and out of town a little during the summer.  Jeff hadn't been able to vacation with us though.  (Of course he was in Dallas with us for the wedding, but I mean actual vacation time.)  Here I was, finally having a relaxing trip....and I was sick.  I had a sore throat, and was coughing like a beast!  I took lots of medicine, so I could try to keep my germs to myself.  I could not believe the timing! 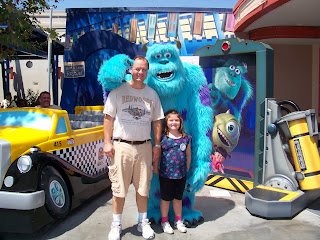 I took this picture near the Monsters, Inc. ride.  I love how the characters always think it is funny to "get" the dad. 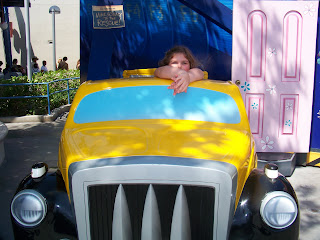 Riley looks like she was in a bad mood here, but she was not.  She was just taking a little break... 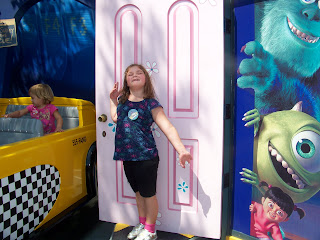 She loved being right by "Boo's Door."

Later on that day, I took Riley to Toon Town.  As many times as we had gone to Disney this year, we had not even entered Toon Town.  At first, Riley didn't even know it was there.  That is one of the hazards of being the youngest of a family.  She has done lots of big kid things, and maybe not enough little kid things.

Riley learned about Toon Town though.  She had been asked by friends if she had gone to Mickey's house, or Minnie's house.  She had to answer no, but then her little 21st century self asked me to show her those attractions on YouTube.

Riley watched various clips of the tour of Minnie's house enough times, that she hardly needed to go!  It was her birthday though, so I took her.  Jeff, Kaitie and Emilee went and did more adventurous things for awhile.

Riley was delighted to finally stand in front of Minnie's refrigerator, and show me a nice variety of cheese. 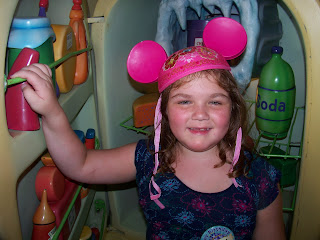 Then we were off to Mickey's house, which was right next door.  It takes A LONG time to get from the beginning of the house, all the way to the end to meet Mickey.  It was hot, and I was not feeling well.  It was all I could do, to keep a nice Mom face on. 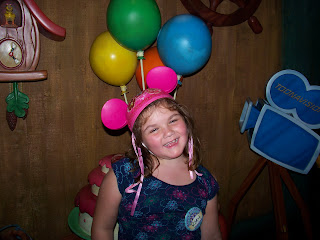 But who would want to be cranky to this girl on her birthday? 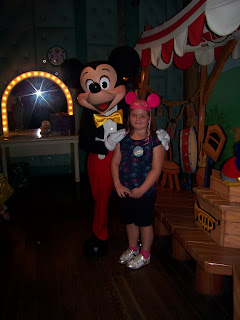 We finally got to Mickey. I wondered if he was worth it.  Riley though, told me later that she wanted to go back through again.  We didn't do it, but it was nice to know that the long wait was worth it to her. 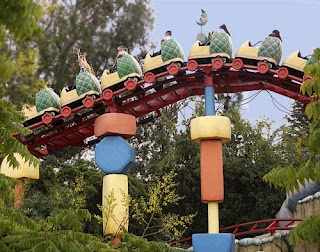 I had to be boring and sit in the shade for awhile after visiting with Mickey.  Thankfully Jeff came along and took Riley on the Gadget Coaster.  It turned out to be one of her favorite things of the day.  He always pops up at the right time, and manages to be her favorite.  It is really very sweet.... 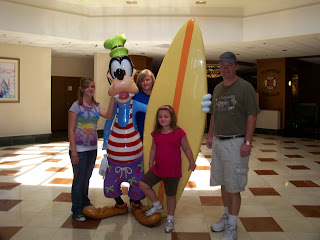 Jeff manages to be my favorite too!  Here is our group at the hotel the next morning.  The night before, Jeff spent some time finding me new and improved medicine so I could function better. 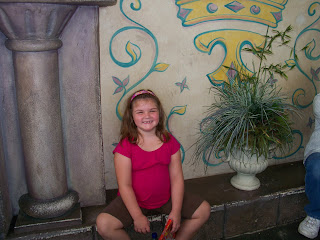 First stop in the park for me and Riley was the Princess Pavilion.  She obviously needed some Princess lessons in sitting properly ;)  Actually, she was so good in this line.  It was a long line.  Riley wanted to be there though.  We played lots of Rock, Paper, Scissors.  We felt sorry for little girls who were crying in the line.  We saw quite a few sweaty screaming babies dressed as princesses....who didn't really want to be there. 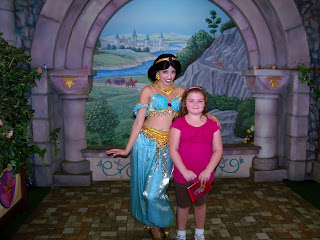 Meeting Princess Jasmine was a bonus for Riley.  Aurora, and Snow White were also back there, ready to sign her autograph book and get a picture taken.  Jasmine was the only one Riley hadn't seen yet this year. 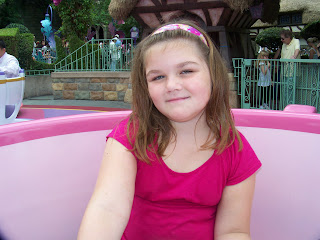 Now, I said I was only going to take pictures of new things, but I took this picture at the Tea Cups, because she was being so sweet, and we were having lots of fun.  Jeff, and the older girls were doing the Indiana Jones thing, and I was happy to just spin with Riley.  (And I love the big rides, but this trip I really focused on my little girl.) 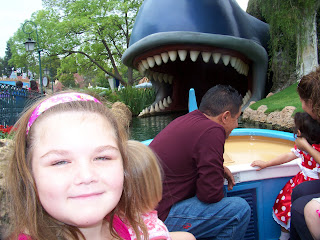 Riley was not dying to go on the Storybook Land Boats, but I was.  I had never been on this ride, and I knew it was my only chance.  I knew it was just miniature houses from the Disney stories, but I am really trying to see it all at Disneyland this year....and I mean ALL.  I don't think I could have paid my older girls to ride this with me, but Riley was great about it. 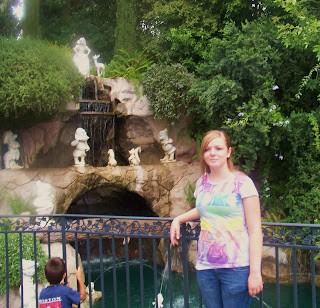 Speaking of seeing it all, here is Emilee at the Snow White Grotto.  We saw it on tv at the hotel, and I remarked that I didn't even know where it was located in the park.  On tv they said it was a place where many marriage proposals took place. Kaitie, Emilee and I found this Grotto while Jeff took Riley on the Dumbo ride.  It was a nice little spot, and I can't believe I had never seen it before. Although we liked it just fine, we agreed that it didn't seem like the perfect marriage proposal place. 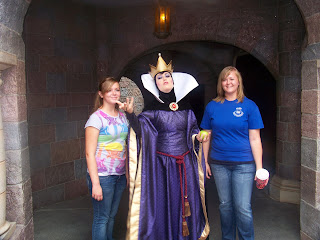 One of the most awesome things in the day, was meeting the Evil Queen as we left the Grotto.  (Years ago, when Ally was little and had this character sign her hat, that is what she signed, "Evil Queen.")  We got to talk to her for a bit, and she was hilarious.  When I took this first picture, she said she wasn't ready. 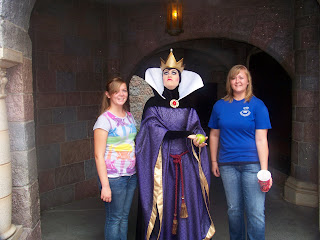 This is the "ready" picture.  I'm scared just looking at her  ;) 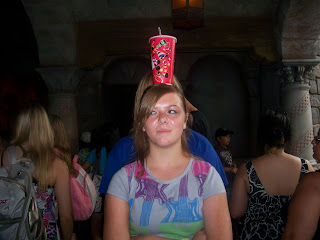 Kaitie, Emilee and I naturally had to ride the Snow White ride next.  Here is how Emilee kept herself (and me) entertained in that short line. 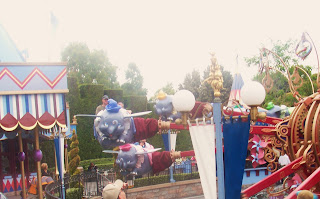 After our adventures, we still made it to Dumbo in time to watch Jeff and Riley ride it together.  After the day was over, she said it was her favorite ride.  I told you that her dad is her favorite!  I totally get it....


After enough Disney fun , we ran back over to California Adventure.  We were hot, and we needed to get wet.  We rode the Grizzly River Run.  It felt good to cool off.  Remember I wasn't feeling well though, so once was enough for me.  Jeff, Kaitie and Emilee decided they needed to go again. 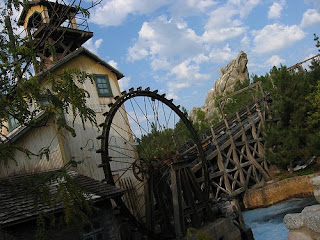 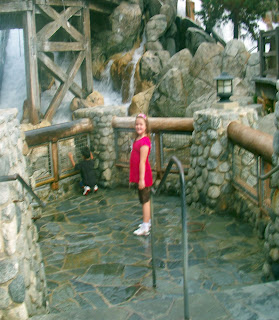 Riley and I walked to this spot, where we would be able to watch their raft come down a big drop.  This was wetter than the Splash Zone at Sea World!  Riley loved waiting in this crazy little area. 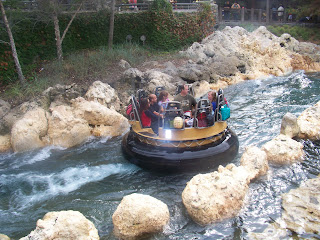 You can see Jeff, Kaitie and Emilee enjoying their second run here.  Jeff lost his hat at the beginning of the first ride.

After this second run, Kaitie and Emilee wanted to go yet again.  Jeff didn't want to, but suddenly Riley did.  So the girls went again, and took Riley.  Jeff loved the place where we waited.  He felt like he was in the mountains. 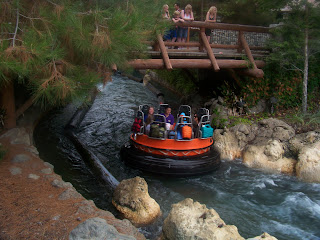 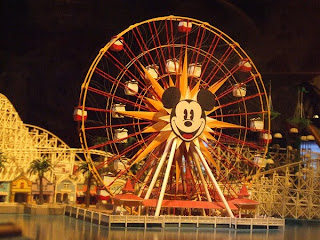 Riley, Jeff and I decided to ride the Mickey Fun Wheel, while Kaitie and Emilee went to the Tower of Terror.  This used to be the Sun Wheel.  It has only been a Mickey wheel for a few months.  (We could see this from our hotel window.)  There are two types of cars on this wheel....cars that are stationary and cars that move.  In typical Riley fashion, she chose stationary cars.  It was relaxing.
During the ride, we could see everything around us.  I asked, "Wouldn't it be funny if I could see Kaitie and Emilee coming over here to meet us?"  In just a minute, I saw them!  They were walking from their exciting ride to meet us, at our not so exciting ride. 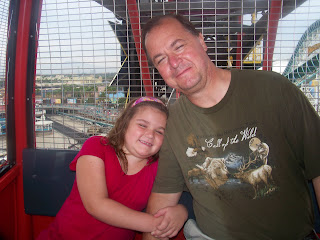 Riley loved the ride though, and why shouldn't she? She was riding with her Dad again!
Posted by Tina at 4:19 PM 9 comments

I haven't felt much like writing, so a few events have passed by that normally would have been reported here. I had a couple more Disney things I was going to write. When I didn't do that, I was sure I would write something about Jeff's birthday, or having Ally home for Labor Day weekend. My brain composed nothing.

Today, I have been enjoying a surprise visit from my parents, yet that is not what is prompting me to write.

The only thing I want to write is that today while I was bringing Emilee home from piano lessons, we had a little laugh in the car. The song "21 Guns" came on the radio. The first time they sing the phrase 21 Guns, I sang along and then I said to Emilee, "That's all I know of this song." "Me too," she expressed with a grin. We each sang that phrase about six or eight more times as it repeated throughout the song. Too bad it wasn't nine times, to go with the theme here. Oh well, it was still strangely enjoyable.

I came home and looked up the lyrics, and the video. I saw a room get riddled with bullet holes. I worried about the people, and the fish, but it looks like they all were going to make it out okay...

It was much more fun just singing the phrase with Emilee.