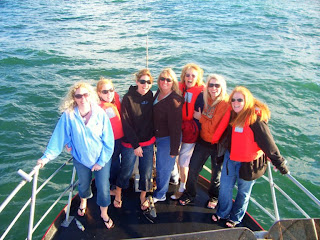 Here I am (right in the middle) almost exactly two years ago, on an amazing girl's trip with my mom and sisters. We stayed in a beach house in Lincoln City, Oregon. This picture was taken while we were on a whale watching tour.

Yesterday I went to a baby shower. I was gone from home for 2 1/2 hours. I felt like I needed to hurry home. When I arrived home I asked Riley, "What did you do while I was gone?" She answered in this surprising way, "You were gone?"

I should have stopped for a pedicure while I was out....
Posted by Tina at 8:01 AM 3 comments

Since the end of dance last week, we no longer have a certain schedule we have to follow. It is amazing. This is the first summer for so many years that we have not had at least a swimming lesson schedule. I thought about putting Riley into lessons, to improve her swimming. Then, I thought about the actual possibility of not having any activities we had to get to each day. At first, it seemed too good to be true. Now, I am just glad we decided to let Riley dog paddle it this year!

In a few short weeks we will return to school, piano lessons and dance classes...at least. I have quite a bit that I have to do in this few weeks, but I won't have to navigate by any set schedule.

So Riley has had friends over every day this week. Yesterday, she had four pals over. We had fun! 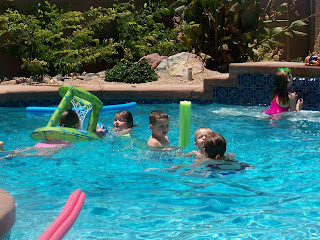 I took a few pictures while I played life guard for this group. 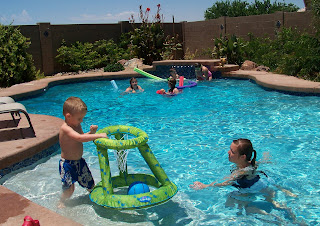 Emilee's job was to keep this Little Cutie busy. It won't be long before he swims as well as everyone else, but he is not there yet. He liked dunking that basketball! 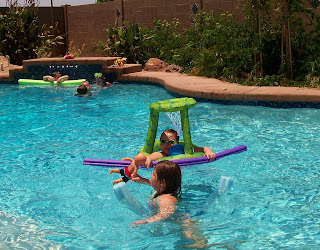 And then, Little Cutie's big sister showed us there was more than one use for the basketball hoop. 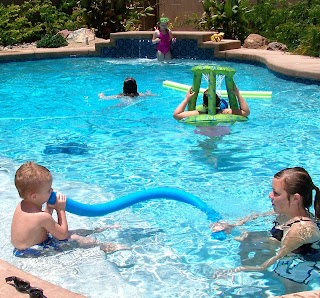 Little Cutie wanted to show Emilee that there was more than one use for a pool noodle as well.

You can see that his other sweet sister in the background was most happy by the waterfall. She had toys back there, and kept busy doing her own thing. 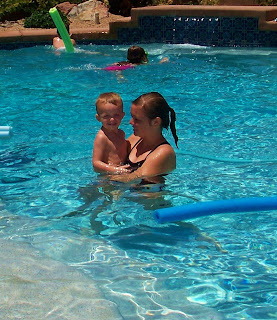 Don't you love that smile? 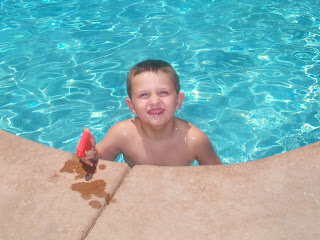 This smile is even better. Cutie's big brother came over to cool me off with the squirt gun. When he looked at me like that I exclaimed, "You are a nut!" He answered, "I am not a nut. I am just really happy right now." 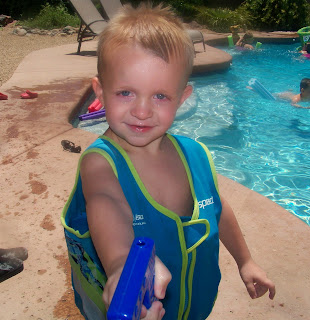 Well, of course Little Cutie could not be left out of that act. They kept me nice and cool...
Posted by Tina at 8:17 AM 3 comments 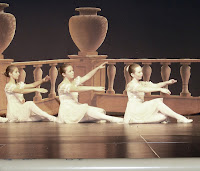 It is the week of the dance recital. 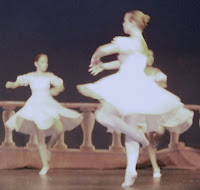 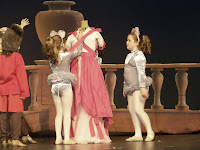 When we went and bought extra bobby pins, fake eyelashes, water bottles, lip gloss and some activity books (for the waiting time) Riley wondered about the extra item in the cart....Excedrin. 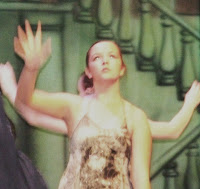 Someday she will understand.
Posted by Tina at 11:17 AM 4 comments

When Marshall, Will and Holly were on their routine expedition, they met more than the greatest earthquake ever known. They met....the Sleestaks. They were an enemy to the human intruders on Land of the Lost. They were outfitted perfectly for a kid like me who wanted to say, "Those are just guys in costumes. They are so fake." They moved very slowly, and were not particularly scary. Like if they had more sophisticated moves and costumes, I might have suspected that there was some reality to the story! If you aren't right about my age, you probably didn't even know about Sleestaks when you were a kid...unless you watched the "remake" in the 1990's.

It is a mere coincidence to this post, that there is a new Land of the Lost movie out right now. I haven't seen it, and I am not actually planning on it. Sleestaks just come to my mind from time to time, since they were present in my formative years.

In fact, I call Jeff a Sleestak, when he wears his big black goggles out to the pool. What do you think?

Just the other night, we ended up inventing a great new game in the pool. We were swimming on Monday night, and Riley was doing an extended amount of splashing. Just when I thought I was going to have to enroll her in some sort of Splasher Protection Program (she was really annoying Emilee)I decided to say that the next person who splashed anyone would not get to have any strawberry pie. Riley had been pondering that strawberry pie, made by Kaitie, for hours. She was really looking forward to it. The splashing stopped for awhile. But really...no splashing? In a pool? It is not possible. It wasn't long before Riley and Emilee were splashing again.

I told them the only way they could earn their strawberry pie back, was to attack the Sleestak. At that point, I got out of the pool, and watched the show. Sleestak Attack was on, and it was hilarious. The girls splashed, poked, and bugged him, and he played his part as the harmless enemy pretty well. I liked watching that show better than the original series. I hope this "Sleestak" will come to mind for Emilee and Riley all their lives from time to time...after all, he is present in their formative years...;)
Posted by Tina at 7:35 AM 4 comments

One of the many things I have been working on lately, is my pictures. I have tons of them. I have been trying to get them more organized. The main project right now is to get pictures of Ryan together, so I can have a disk made of milestones and highlights in his life.

This is a hard project. Some pictures are so meaningful to me, but wouldn't look like much to others. I realize there is not going to be a one-size-fits-all disk. The one I am doing now, will be nice, but then I need to do one for myself. Of course, I like certain pictures because of memories and feelings that come back to me.

For example, here is a picture and blog post from more than five years ago. In January 2004, I was constantly aware of the fact that Ryan would soon graduate from high school and move on in his life. It was hard for me in many ways...but also such a blessing to have a good son. Back then, I wished I knew how to hold back time. Now I know that watching him do good things with his life is awesome from both near and far away.


One day, when 17 year old Ryan came home from school, I handed him his baby sister. I rarely do that. Well, Ryan rarely just comes home from school. He is generally on his way somewhere else....work, a guitar lesson, or to the home of a friend. However on this day he was home and I said, "Please take care of Riley for just a few minutes. She's driving me crazy." I love this little girl, but she is into everything. Sometimes I can almost chart the events of her day by going from room to room in the house, and taking note of the specific destruction.

Ryan decided to take her outside. I looked outside a few minutes later, and this is what I saw. I got my camera and snapped this picture, which I love. My first baby, and my last baby were connecting...having a moment, a "conversation." I loved seeing him so caring and relaxed. She had her eyes full of big brother and it was sweet.

Riley is lucky to live in a family where she has so many people to look out for her. There is enough space between the ages that no one is mean to her. The kids think enough of her to actually be nice to each other too...okay, not all the time.

I truthfully tell them that she is watching and copying everything they do. That is often enough to soften an emerging bad mood. My big kids are learning more about love than they otherwise would. I think what they feel for her will only be surpassed when they have their own families and their own children later in life.

On the day all of my girls received their flu shots (a lot of good it was...but that is a different story) my girls all wished they could take Riley's shot for her. That is the kind of thing that makes my long years of raising children worthwhile.

It won't be long until Ryan is looking at different horizons than I am. I think I will frame this little picture and send it along with him. He will know that those little eyes are still watching him wherever he is.

Ryan has certainly seen many different horizons since then! Many more are certainly in his future.

(I only wish one thing, that Riley's presence still inspired that amazing sweetness that it used to when she was a baby. The current phase we are going through is just a bit different than that.)
Posted by Tina at 7:50 AM 3 comments

I can't stand to delete my text messages, without reviewing them. I know it would be much more efficient to empty the whole box at the same time, but I like the little review. Sometimes I even save the fun ones for awhile, so I can have that memory more than once. I have recently gone through and deleted my messages, from my kids and a few other people. The messages from my kids seem to have a theme.....

My kids have found texting to be a very convenient way to let me know what it is I am supposed to be doing for them. They send me pictures of things they want, and need. They send me reminders, and shopping lists. They seem to think "send" is a magic button!

As you might well imagine, I have been quite the chauffeur over the years. How nice it is for them now, to be able to give exact instructions on when and where to bring the car around. The plot thickens when they also state amounts of cash that they hope are waiting for them in the passenger seat when they get in ;)

Like everything else in this world, there is potential for things to go wrong with cell phone use. But like most everything else, I choose to look on the bright side and appreciate it for how it benefits me. I receive a lot more than requests from that little screen. I also get important information like this:


Last night I dreamed that Dad got a mohawk!