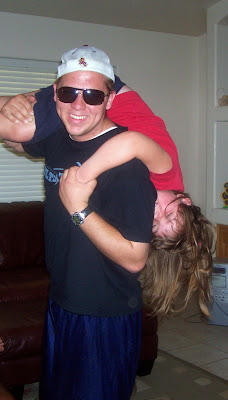 Ryan is home for a few days, between semesters of school. Even though he is exhausted from his semester, and a couple of days of driving, he brings a different energy into the house.

Ever since Ryan was in high school, he told me he wanted to do some type of foreign exchange program to study Spanish. I wasn't sure that would ever really happen. I thought he might serve a Spanish speaking mission for church. Those two years were actually spent in Mongolia. He has been home from Mongolia for 15 months, attending school, and still actively pursuing his goal of studying Spanish.
Posted by Tina at 8:29 AM

Tri-lingual Ryan is going to solve the world's problems. We had quite a fun time with him yesterday

Ok...should I tell Jeff this? He may kidnap Ryan and go in his place!

Sounds like a great adventure to look forward to. I hope you have a wonderful time with him before he heads off.